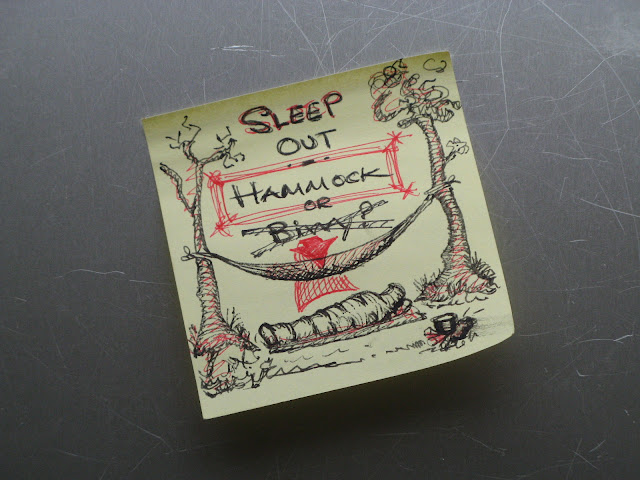 SWING YOURSELF SLEEP IN A HAMMOCK

Given the choice I usually take a hammock-tarp combination for sleeping out; especially for multi-day trips, and for pretty much all landscapes and climates and seasons. Why? Well, mainly because the system is more flexible. You can use a hammock and tarp combo on the ground, but you can't string a bivvy bag up as a hammock. Under nearly all conditions a hammock-tarp combo is more comfortable and more weather-proof.

That said – and despite the point I make below about being able to find two uprights to swing you bed from in most landscapes – if I was just heading out for a night or two and going up high or into country where finding trees or similar uprights was going to prove challenging then i'd take a bivvy bag. And, too, if I was going in for some clandestine stealth camping across busy countryside; though i've strung hammocks low to the ground in cover so they are almost invisible.

So, there's a point. There's no one-size-fits-all outdoor sleeping arrangement. When heading out I'll chose between a bivvy bag or a hammock depending on the conditions I can reasonably expect. I'd use a tent if that was the smartest move. But I'd also have the confidence, gained from experience, that whatever kit I had with me, even if not ideal, i'd still get the most comfortable night's sleep possible out of it.

It's the Pareto Principle again. 20% of your comfort comes from your kit, and 80% from your experience and skills.

I had quite a few false starts in swinging whilst sleeping; I started off with a cheap, lightweight 'Commando' netting hammock but they're not ideal, as things get caught up in the thin-string mesh and it requires too much other kit to insulate you and keep warm. The cotton fabric hammocks I used in South America were fine for sleeping in but too big and heavy to carry on foot trips. Though in Venezuela, riding with local vaqueros in forested country that was thick with snakes, alligators, and insects, and was flooded for half the year a hammock carried on your saddle was next to your machete the most essential piece of kit. One of the handiest hammocks I saw in South American was a bit of cowboy-tech, and made from a large oblong of rawhide with lines of two-inch long slits made along its length in parallel lines each about an eighth of an inch apart right across its width so that the whole opened out into a mesh when strung between two trees and climbed into, (have I explained that well enough so you can see how it would work?).

Making hammocks is easy. I've thrown up hammocks in a few minutes for garden parties and festivals. A long piece of strong fabric is what you need; an eight or nine foot curtain from a charity shop, or somebody else's window, is ideal. Tie a rope to either end – folding the end of the fabric back on itself and using a double sheet bend is easiest – string it up between two trees or whatever and lie back.

But for sleeping out on lightweight trips you need something a bit more sophisticated but just as simple. I tried different hammock designs, learnt a lot more about techniques and then unlearnt a lot of what i'd learnt as being over-complicated and finally settled on a core kit of a lightweight double-skin poly-cotton hammock (a Travelproof, see below for details) and a super-light poncho-tarp. This was light and compact enough to carry as minimal kit on horse and walking trips in all weathers and use in everything from scorching Andalusian summers to below-zero winter trips in northern Europe and through night after night of rain in Ireland and Patagonia. 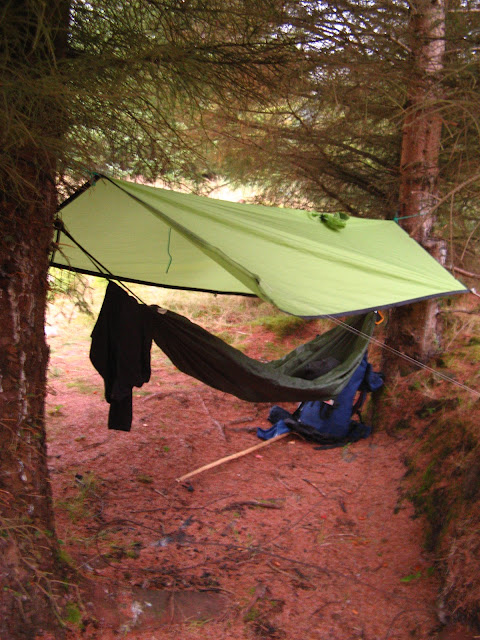 So, the pros and cons of hammock sleeping: 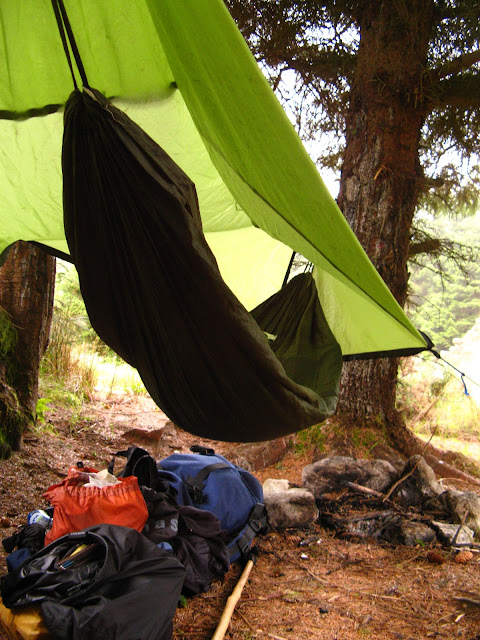 The hammock I use is a Travelproof Tropical Hammock. I bought it more than ten years ago from Nomad Travel in the UK, and it's still fine after a fair bit of use. Nomad Travel are a good company to deal. Careful, though, they've got lots of desirable kit, that's well thought out and often hard to find elsewhere, and you might be tempted to add to your check-out cart. I'd advise against going for the more expensive and more complicated hammock-net-shelter combinations they also sell, certainly when you're starting out. As pointed out above, starting simple will teach you a lot about hammock camping with minimal outlay, and what it teaches you will then probably mean you don't need to get anything more complicated in the future unless you're heading into really extreme conditions. (Which fool themselves as they will, very few people actually do). Despite the 'Tropical' bit the Travelproof isn't just for warm climates; it's the one that i've used down to minus five Centigrade on multi-day trips, and in night after night of rain and wet across Patagonia, Ireland and the UK in all seasons. http://www.nomadtravel.co.uk/p-129-travelproof-tropical-hammock.aspx

The shelter I use with my hammock is a Sea-to-Summit poncho-tarp. The one I gave details for in the previous post on bivvy bags. It's well designed, super-light and strong, has enough tie-loops around the hem, and is just big enough in length and breadth to cover the hammock adequately. The link, again:-http://www.seatosummit.com.au/showdetail.php?Code=PONCHONY But you could also look at Nomad Travel's ponchos – cheap, cheerful and tough enough to make an adequate shelter tarp over a hammock.


http://www.hammockforums.net/ is one of the most comprehensive forums for hammock camping discussions. Covers everything you need to know, and often far more than you need to know.

Google 'hammock camping' and you'll see how much stuff there is on the internet: A lot! A huge number of discussions centre on which is better, a hammock or a tent. And there are huge-r amounts of chat about the merits or otherwise of different systems. These can be good to read; there's some good advice from people who have hammock camped in all kinds of situations. But keep in mind that the point of minimalist kit for sleeping out – whether tents, hammocks, bivvies or tarps – is to keep the kit minimal. When you get to the rigs for sale – tens of different hammock-shelter-quilt-underquilt-socks designs, all of differing cost and complexity – bear in mind that you'll learn more by starting off with a simple double-skin hammock with a separate tarp/shelter sheet. And that will probably do you for the rest of time in most conditions.

The rest of the equipment you'll need, like under-mats, sleeping bags and so forth you probably have already or doesn't need to be specially designed for hammock camping. If and when you start pushing hammock-camping to extremes, and that really means into sub-zero temperatures, or some of the more challenging jungle environments then you can buy a few extras like fitted mosquito nets, or under-quilts, and a more shaped shelter-sheet to keep in warmth.

But it is all about keeping things simple. 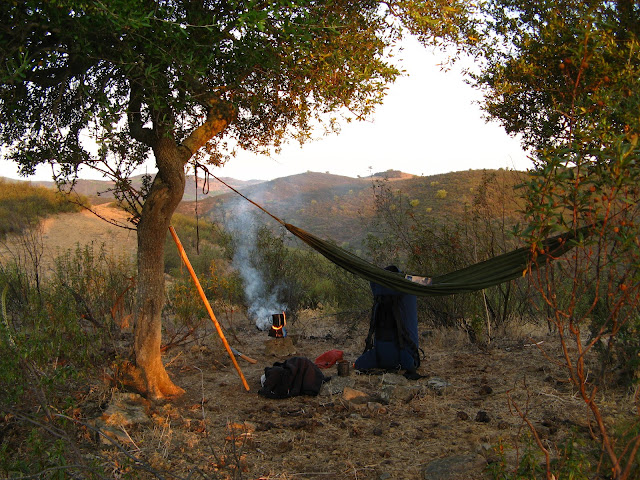