WHAT IS THE 'SLOW ADVENTURE,' ANYWAY? 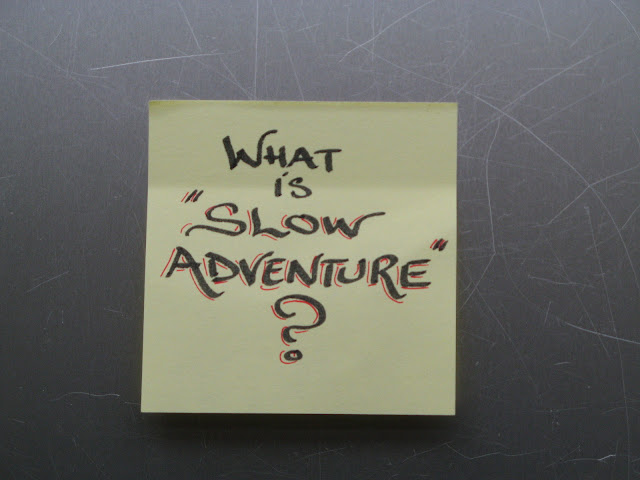 'Slow Adventure' is a post-event concept like 'folk-rock.' Possibly. Well, a little, at least. Something like, anyway.

Something happens and then it keeps happening. And then, with the benefit of hindsight comes the realisation that that something that's been happening a lot has become 'something' and so needs a label.

There would have been plenty of people – folk, even – with electric guitars, and drums and basses playing skiffle and proto-rock 'n' roll and jump jive in the 1950s and early 60s – hell, maybe way earlier than that, too - who'd taken to bashing out versions of John Henry and Blowing in the Wind and for all I know, Greensleeves with full 4/4 back-beat, 12-string Rickenbacker power chords, Little Richard-styled vocals and up-the-neck solos. But it didn't get called folk-rock till way after it had started, when it became apparent – around the mid-1960s - that folk purists being annoyed by Dylan and the Byrds and the rest of the folkies-gone-rock was some kind of movement, and so needed to be called something. Something like, er, folk-rock 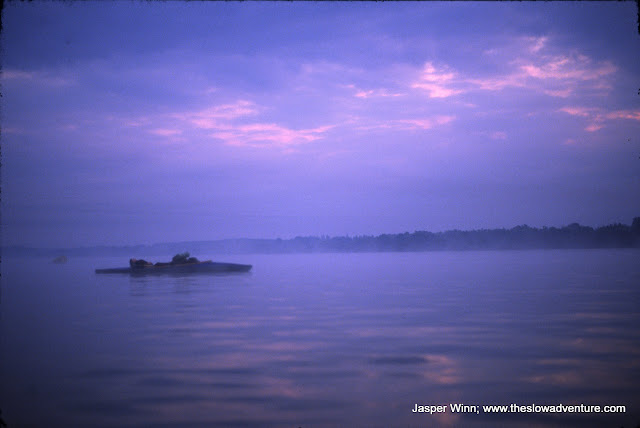 It seemed that there was some kind of unifying theory that tied together my three decades of poorly-planned, low-tech, comically-inept but ultimately successful travel.

Cycling across the Sahara (twice, actually, due to a planning oversight); paddling down the 2,500 kms length of the Danube in toy-store folding canoes during Iron Curtain days; a triathlon length of Ireland by hire-bike, borrowed canoe and on foot; in-line skating the length of the Netherlands. They were all amusing trips, and they inspired more serious journeys. But those 'serious' jaunts, whether walking thousands of kilometres in Africa to research transhumance, or working with local horsemen on long in-the-saddle trips across twenty different countries in five continents to study traditional horse skills, or sea-kayaking the 1,600 kms around Ireland's coastline to write a book, all seemed to follow similar patterns. They were all part of 'the slow adventure' that is life. My life, and everyone else's life too, whether they realise it or not. 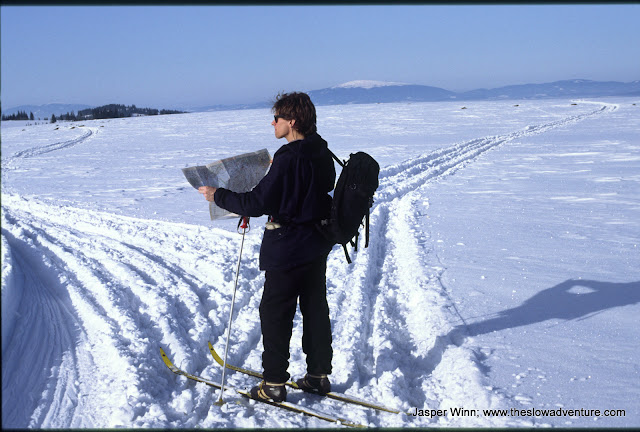 Here's a piece I wrote for the Irish Times a few months ago, when I was still trying to define just what it was that defined some experiences and endeavours as expeditions and feats, and others as slow adventures.

A friend of mine, Sophie Campbell, got up one morning, and on a whim walked out of her door in London and kept on walking until, a couple of weeks later, she reached the coast at Chesil Beach in Dorset some 250 kilometres away. “I just grabbed a day pack, I wore my trainers, oh, and I forgot my toothbrush so I had to buy one on the way,” she says, “I got onto the Thames Path, then the Ridgeway and then the Macmillian Way, but none of it was planned. I just went. I wanted to see what it was like if I got up to go to work but then didn't catch my bus and instead just kept walking. It was a wonderful thing to do.”

Wonderful, yes. But was it an adventure? Well, considering the trip wasn't plotted and prepared for then no less an authority than Roald Amundsen, the Norwegian explorer who beat Scott to the South Pole, certainly would have thought so. Though not in an approving way. “Adventure,” he claimed, “is just bad planning." His polar expedition was based on extensively tested skills, equipment and clothing, and his meticulous organisation included calculating how many of his sled dogs his men and the other dogs would eat on the return journey from the Pole. There was certainly no lee-way for whims and forgetting your toothbrush on Amundsen's trip.

Maybe not doing too much planning is a good thing when travelling in the modern world. Especially if you do want to have adventures. It's getting harder to find genuinely remote places and have authentic experiences in the manner of the explorers of the past. Pretty much anywhere in the world that could only be reached by long walks fifty years ago now has a road running to it, and an internet cafe at the end of that road. But does that mean that there are no travel adventures still to be had? Of course not. It's just a question of how to do it.

Some take the Amundsen way, by training, preparing and equipping themselves to take on geographical extremes.. Right now I'm following Sarah Outen's blog as she prepares to row from Japan to Canada, the next stage in her 35,000 kilometres London-to-London kayak-cycle-rowboat circumnavigation of the globe. On a previous trip she rowed seven and a half thousand kilometres alone across the Indian Ocean, so her current expedition probably has a good chance of success.

And then there's Chris Duff who is preparing to row from Scotland via the Faeroe Islands to Iceland. It's his second attempt at the route. And I guess he's done even more planning this time around. Chris' voyage I can sort of identify with. He circumnavigated Ireland in a sea-kayak in 1996, eleven years before I paddled the same 1,600 kms of coastline. But there the similarities end. He was an proven sea-paddler and my experience was limited. I didn't do much planning because I didn't know what I was planning for. But I did have one thing in my favour; I had as much time at my disposal as the trip might take. Many months if, as it turned out, they were needed. That – taking as long as it takes to achieve something, rather than racing the clock – is another way of doing things. It's not Amsuden-style, but the way of 'slow adventure.'

Slow adventure is similar to the whole 'slow' movement. Slow food. Slow towns. Slow sex. Slow travel. It's all about enjoying the process rather than the result. Maybe not actually having a goal at all. It's about taking time to appreciate what one's doing rather than what ones hoping to do.

Anyone can have a slow adventure. It's as easy as deciding to step out of your door one morning and just keeping walking. Or doing something new on the spur of the moment the next time you're abroad. Adventure will follow. Just don't plan on it. 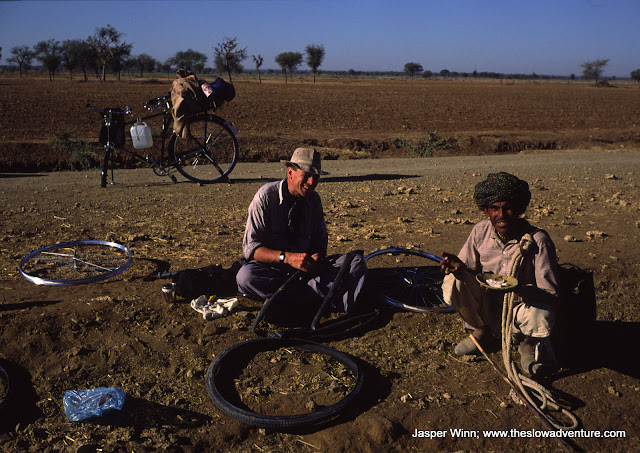 What constitutes an actual slow adventure? 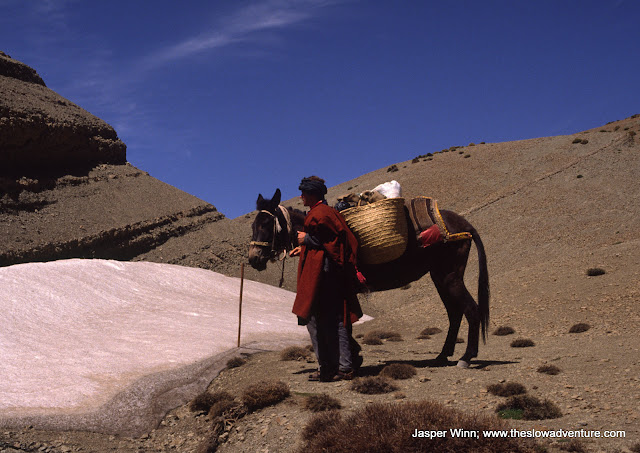 Here's some early slow adventures, (though i didn't know that's what they were back then). I've tried to indicate what the key element in each is that makes it a 'slow adventure,' and so puts it midway between an expedition at one end of the spectrum and a paid-for, itinerary-ed, time-tabled, guided experience. Nothing wrong with either of those ways of travelling (or indeed getting through life) it's just that neither way works for me. Nor I guess for a lot of other people.

A slow adventure, I reckon, usually comes about because of something happening that's unplanned, or comic, or a mistake, or a distraction. None of those tend to make the any particular jaunt a failure, or less successful, or less challenging or more dangerous (much). Mostly the random nature of slow adventuring means the unexpected happening just makes the trip different but as good as anything else you might have intended to do, or even have done. 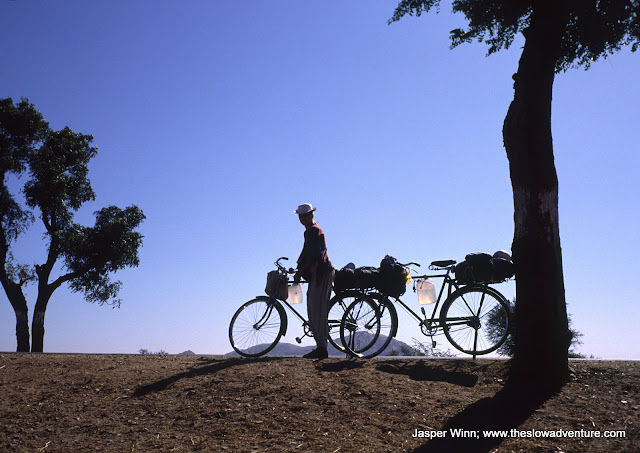 So, some case studies (that don't bear too much studying, to be honest) draw from my early slow adventures:


And so on. I guess one can see a pattern in all the above. An idea rather than a too-specific goal, not much planning, a tendency to just head off and see what happens, no specialised kit, nor much money, trying something different when things seem to be going wrong, no sense of record breaking or competition or having to achieve something. 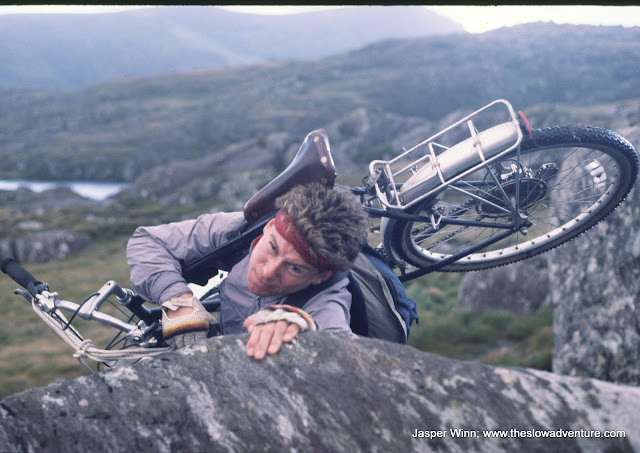