ANYONE ONE HERE KNOW HERZOG? 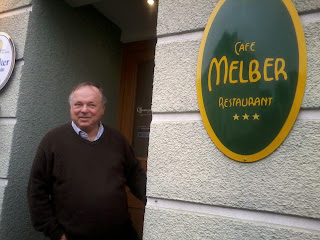 Werner Herzog is not only a man of extremes - as following his 500 mile walk between Munich and Paris is proving - but a man who provokes extremes. Since leaving Munich a week ago not one person - honestly, not one - knew of Herzog. Not even the faintest limbic recognition of his name. Until yesterday in Munderkingen when I walked into the wonderful Café Melber (opened in 1899, closed in '39 and reopened in 1999). Proprietor, Herr Casper, not only knew of Herzog, but knew all his films and had met him 25 years ago at a showing of Fitzcarraldo at a local film festival. Amongst many photos of old Munderkingen, classic film stills and French art photography hung on the walls he had a portrait of a young and angelic-looking Klaus Kinsky. Herr Casper also appropriated a pretzel from the shopping of one of his regulars (who apparently had bought an Irish lordship with some friends on a whim) for my breakfast.
All this set me up for a longish walk along the Danube - getting an eyeful of an early but...um...confident example of Baroque in the monastery at Untermarchtal along with the skull of Saint Tiberius - in drizzle.
Later where I'd stopped under a shelter for wanderers in a small village a young woman cycled past, paused, turned back and asked if I'd like a 'hot sausage.' I thought I probably did. She pulled one out of a can hanging from her handlebars, gave it to me and cycled on.
I climbed high up into a forest and camped on the hilltop by a shrine, a wooden log trough filling from a natural spring and a bench and table (the latter supported my tarp when it was time to sleep. I heated soup and crumbled rye bread into it and looked out over the world below - village lights, a distant factory emitting rumbles and clatters through the night, rushing trains in the narrow Danube valley. All else was dark. To the west rose the Schwabian Alps into which I'll set off after this coffee in Zwiefalten (more Baroque - which I define a kitsch with a bigger budget).
Before dawn I was woken by the barking of muntjac deer. Once up, with coffee made, I spent an hour housekeeping - amazing how much stuff accumulates in a small bag, and how muddled. Walking is only a small part of a long walk. The rest is looking for good shelter spots, making food and preparing for bad weather. The coming mountains and the - surely - coming winter weather has concentrated my mind.
Herzog is a day and a half ahead of me at this point, with painful feet and appalling weather. He's spending some nights in hotels to dry out. I'm hoping to find under-roof accommodation on Sunday so I can wash my walking clothes.
As the song I often sing goes; 'walk on, walk on, you've got to keep on walking till you find your way back home.'