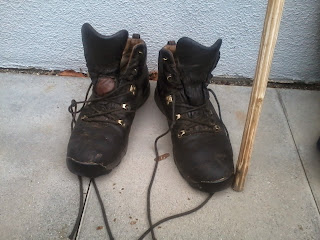 The final resting place of the best walking boots I've had. Brasher ultra-lights, and of a quality they don't make anymore. This pair have been going for over a decade and only the soles have departed. I should have got them re-soled before this stroll but didn't. Can't find anyone en route who can fix them in under several days. Sadly their last resting place is outside Lidl in Illertissen  where I bought a €19 pair of leather work boots. They didn't deserve that. But then who does get the end - good or bad - they deserve?
I've noted the number of messages, texts and emails  I've got from people which start by saying they've just got out of a steaming bath, or are in front of a roaring fire, finishing a sumptuous meal or about to hop into a warm bed. One message included a photo of the sender swinging from a palm tree on a beach in Bali. All drew attention to the fact that I'd be settling into a damp, cold wood for the night, footsore and probably hungry. Well, you're all forgiven. Because comfort is the consolation prize for NOT walking and sleeping in hedges and being so famished that raw fish in sour cream with a banana (todays lunch, and in fact probably the only meal of the day) tastes like a banquet. Second prize isn't so bad but...
The Gasthof host where I had a few evening beers last night has been the first person to be thrilled by my walk. He kept shaking my hand, and sent me off with two miniatures of the inn's speciality schnapps; I'm curious to see if it'll work in my stove.
It's a grey, damp, cold day and it's an effort to keep on. Two hours, a coffee and a weiss dunkle beer in this cheap café run by cheery, blousy Russian women ministering to tables of elderly regulars.
Time to try out these new boots.
I'm crossing the Iller River, and walking off my first map and onto my second. I've only got three maps to cover the whole munich to paris distance - unfortunately having walked right across one of the three maps in six days doesn't mean I'm a third of the way. The third map - the whole French leg - is at a much smaller scale. Still, it's a map down, and all I've got to do is keep going west. For a while more.