I WALK THE LINE 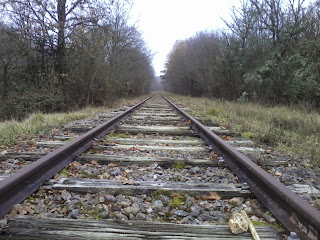 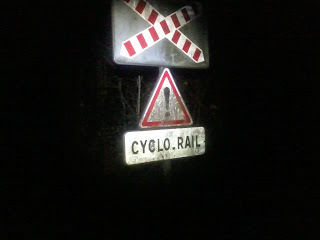 My lucky coup - discovering the decommissioned railway line running west yesterday - carried me on into the night for another ten miles. This section is used for as a cycle-train route - I assume some kind of pedalled contraption that runs along the rails that one can hire. In the dark of a November evening there was none of that going on. But it meant that there was a cleared path beside the track - which was great; however romantic the idea of trotting along on the railway ties might be the actuality is hell. They're spaced too close for anything other than a tiring mincing skip, and they're slippery and between them are ankle-twister ballast rocks of billiard ball size and rollingness. But with the path I made good time.
Just as well that yesterday was such a jolly experience and with twenty-five miles knocked off because today's been the first tinged with a touch of the grim.
Good start with a few more miles from my woodland bivvy to end of rail track. Then not one but three - open - boulangeries within a few kms of each other (being fair I bought something in each one).
But then it was a seemingly endless footsore sixteen mile trudge up and over a long barren series of rather high hills along the verge of a busy-enough road. And all in freezing fog. Dangerous, dull and couldn't see a thing bar rubbish in the grass at my feet and the lights of oncoming traffic. The village I passed around lunchtime was dead and seemingly just a series of mostly abandoned houses either side of the same busy road. I hunched in a doorway and boiled up water for a cup-a-soup and had some bread and cheese (a rather petit Munster, as you ask) and then trotted on into the gloom.
Now I'm in a smart hotel bar in Colombey les Deux Eglises, site of the memorial and museum dedicated to Charles de Gaulle. And feeling much jollier. Apparently, I'm that easily cheered up. Then again, the whole 500 mile walk is really about appreciating life's essential needs.
I texted something along those lines to Dave Flower (mentioned before in these posts; lender of sleeping bag for this trip, and co-Danube paddler in the past). ' I walk, eat, sleep - that's it,' I wrote.
'Sounds like my dog's routine - I should hook you up.'
But he's right - and it's a simpler description of this walk's rewards than my rambling on about randomness and immediacy in yesterday's post. It is an animal existence. But that of a happy animal.
But trotting along in this grimmer weather and getting overall a bit jaded (I've been sleeping out with minimal kit and walking full mileage every day without a break for over three weeks at this point) helps me understand Herzog's walk and attitude better. If I'm a happy dog having a hound's holiday, quite often distracted by things along the way and trying to stay reasonably comfortable, Herzog was like a wolf totally focused on hunting down Paris, loping along doing incredible mileage each day, impervious to far wise worse weather, sleeping rough wherever he has to.
A biologist studying wolves in the wild told me that one of the sure signs that one was following a wolf and not a large dog was that a wolf decided what it was doing and where it was going and then just moved as straight and efficiently as possible. A dog would get distracted my a smell, or head off track out of curiosity, or stop for a while, or have a roll. Sort of the point I was making above.
It's now dusk. The only way out of this town - and I need to do another eight or ten miles tonight, then find somewhere sheltered to set up my tarp - is on the same busy, fast, foggy road I came in on, or out on a small hilly road that takes a far longer route. What would a wolf do? What would a dog do?