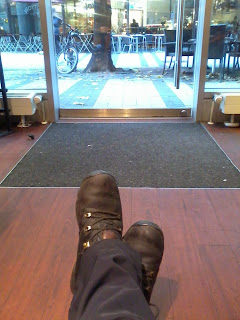 I'm in Cologne and about to catch a train to Munich. The idea is that I'll get out at the main station and start towards Paris when I get in, around midnight. Unless I don't.
I spent last night in Faro, in a 300 years old house in the old town - now an eccentric pension it was as weird and as restful as a David Lynch film - strange half dressed characters sitting hunched in chairs at dawn, nocturnal walkers around the labyrinth corridors, the moon-faced Danish rice farmer, and the tiny dog like a polecat. Think I'll stick with Herzog.
In Cologne I had a short shopping list. A knife - airport security precluded carrying one I already own. A sleeping mat - hammock sleeping requires good insulation under one. Food - I realised that I have no idea if the tens of villages I'll walk through in the coming 500 miles have shops, inns and bars, or whether they'll be like those dead commuter hamlets where life has drained away to nearby cities and shopping malls and super stores. Apart from a rough picnic for the train the only iron rations I've got if there are few shops are oats and dates.
There was also a long search for surgical spirit - woundbenzine. Finally found in a chemist where I underwent a long interview in broken german about what I wanted it for. To fuel my stove and anoint my feet. They were concerned I was going to drink it. I had hoped that I'd avoid looking like a derelict until much later in the trip.
Overall I haven't really thought about the coming weeks and miles. Hour by hour and step by step...