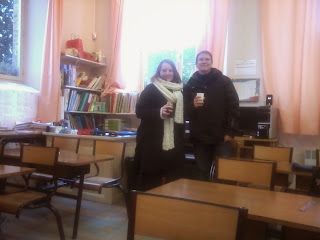 Yesterday was one of the longest stretches without a café, boulangerie or refuge of that nature. But it was a day punctuated by kindnesses.
I'd decided to dog-leg through the Natural Parc de Foret d'Orient. Actually its lakes were only created in the 1960s but they've been enthusiastically adopted by tens of passing rare bird species as wintering waters or migration stops. Or so I had to believe. The day was grey, drizzly and cold. Not a bird to be seen. Some distant calls - cranes? My totem bird. Or geese?
In the parc information centre the very helpful Valerie gave me a printed bird list (I was writing it out by hand from an info book) and a shot of wifi. As well as the bad news - not a café or bar before Troyes some fifteen miles away.
But in the next village, Geraudot, a hopeful enquiry about coffee saw me invited into the village school by teachers Aureli and Cristal (that's them in the pic) for a hot cuppa and a tangerine. Remember your own school days when you were around eight years old? That's how thrilled the 25 or so kids were by this unexpected apparition and break in routine. I hoped I was going to be asked to address the class; 'ok guys, to be honest formal schooling's a bit overrated - get ahead of the game and hit the road young...' Wisely, this was not to be. They were sent out to play and the teachers and I talked about a common theme on this walk - the atrophy and death of small villages. Without a café or bar, said Aureli, a village loses its heart.
And the same without a school  added Cristal.
My cue to praise their happy, warm, book filled, painting hung one-room school. And their polite, interested pupils (quite a few came back to ask me how far I'd walked, whether it was cold and whether out was lonely walking all alone.
It is a lovely school, said Aureli, it's being closed next year and the children will be bussed to so bigger school.
I walked on. It was just freezing as dusk fell. And from the glistening expanses of ploughed field and harvested maize praries tens of cranes lifted off into the air and flew up over the woods and back to the lakes. Making the same joyous calls I'd heard earlier.
In the dark I stopped in a small village to ask a woman the way. Without hesitation she - Madame Berthelin - asked me into her warm kitchen for coffee. Another 'pilgrim' had come by the year before on his way to Santiago. She assumed I was off to address myself to the Marie who was honour-bound to provide or find lodging for the night for genuine pilgrims. How nice, how medieval, how tempting.
But I'm not that kind of pilgrim - my walk is more selfish and individual, (though no longer totally so - sometimes the journey starts before ones cause is found).
I walked for another hour or so, until I looked down on the lights of Troyes, then found a copse on a hill and burrowed under the thick ivy choking a walnut tree. This kept some of my heat in and most of the rain off.