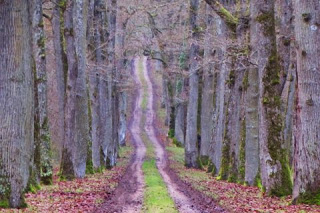 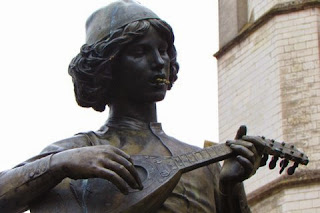 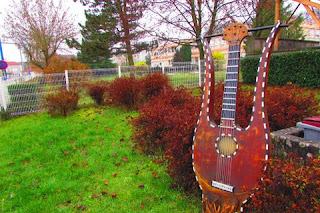 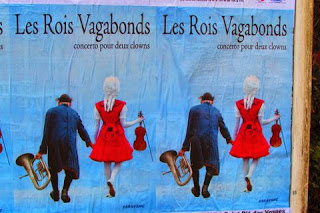 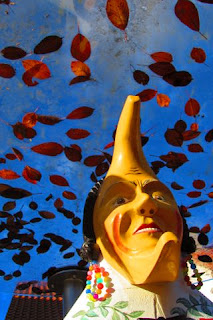 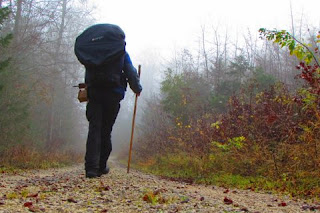 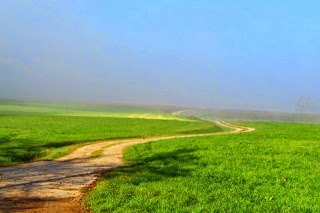 Singing - the least embarrassing way of talking to oneself out loud.

I carried an MP3 player but apart from listening to a few podcasts -
one on solitude, and a series on night walking and darkness subjects
by Jarvis Cocker - didn't use it once to play music. The battery ran
out in the first few days, of course, and it stayed buried in my pack
from then onwards.

In bars - especially the French 'sports and lotto and tabac' cafes'
there were often TV screens playing music videos. I heard Chandelier
by Sia, and David Ezra' Budapest' over and over, as well as random
rap, chanson, flamenco (?), and Europop.

But overall i sang.

My subconscious seemed to provide a random play list of suggestions
for songs that popped into my head, onto my lips and from thence
echoed around the hills and forests (old broadleaf woodland has a
wonderful, and unsuspected, echo that beats any shower).

There were mornings of early Dylan - Tangled up in Blue, One Too Many
Mornings, She Belongs to Me and Song to Woody came up a lot.
Long Beatles sessions - i'd pick an album and sing my way through from
beginning to end.
West Coast rock.

Many days of folk songs - for obvious reasons many fitted with the
pace and sentiments of walking and of the rural life around me. A
world of tramps, pilgrims, rakes, soldiers, solitude, bunches of
thyme, fairs, horses, dark woods and birds fitted nicely. High Germany
was a favourite. And Ewan McColl's Travelling People. And Brendan
Behan's The Captains and the Kings.

Every one of the five Sundays i was walking i sang Kris
Kristofferson's Sunday Morning Coming Down over and over. A little
ritual, if you like.
I sang my own songs. Ones i've already written and sing onstage and
with bands or solo. I finished off or added or improved verses for
songs that needed them.

And i came up with new songs. I've Grown A Beard for Christmas -
sample lyric '....just like Santa Claus, it's not a thing of beauty,
but it keeps me warm outdoors' is one that i probably won't be singing
a lot in the future; it was of its time and place. But Bird Of Passage
might trouble a few ears in the future - especially when i next get my
fingers on my guitar. And faux-Gospe/Work Holler/Sea Chanty number
Climb, Climb, Climb To The Top Of The Hill was created whilst puffing
my way up to the 800 metre high point of my route across the Black
Forest heights (the actual highest peak, Feldburg is 1,500 metres) and
so is ideal as a mantra for exactly that kind of short-breathed,
spirits-up plodding, and was sung lustily across France's Vosges
mountains and beyond.

I had a 'concept album' of road songs that could fill several hours of
rambling-time singing. Further On Down The Road, He Ain't Heavy He's
My Brother, The Long and Winding..., and Walk On were mainstays - but
there were many more.

And themes often provided me with a quiz like game as i tried to
remember and sing as many songs about subjects such as birds, cars,
Gypsies, fires or coffee.

Simple pleasures. And one of the least offensive, really.

One song that i sang a lot - both because of its aptness, and - more -
because it's a great song, was Jimmy Buffet's 'He Went To Paris.
I quoted a few lines in an earlier post. '...warm summer breezes and
French wine and cheeses...' but the end of the song (here's a link
https://www.youtube.com/watch?v=XGmERAWVdWM - the accompanying video
is a bit close to the most testing parts of the walk. Or better buy
the album, A White Sport Coat and a Pink Crustacean; it's all good.)
was especially apt for the walk...