IT'S ALL IN THE PLANNING 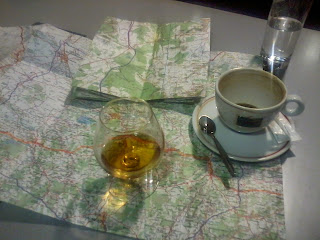 I've reached Bar-sur-Aube, within striking distance of Troyes. From there I'll feel like I'm on the last leg - still a hundred miles to reach Paris but it should be achievable.
Herzog was in a bad way at this point from reading Vom Gehen Im Eis/Of Walking In Ice. He's been battling extreme weather for weeks, sleeping rough and with poor clothing. He's also walking immense distances - the difference between a sustainable mileage day after day and walking to breakdown is only a few extra miles per diam; I'm taking four weeks to do the five hundred miles and feeling fine (so far); Herzog took just over three weeks and at this point his journal tips in and out of observation and crazed flights of fancy (or hallucinations?). His feet are miserable. My admiration for him and for his feat is huge.
But Herzog had something I don't have; a single-minded focus. He's walking to Paris because he sincerely believes that by doing so film critic and his champion, Lotte Eisner, will survive a serious illness.
I, on the other hand, have no such goal. It's about the journey not the destination. Paris will be a bit of an anti-climax - I've nothing to do there but climb onto a Megabus or Eurostar machine and be whisked away.
So unlike Herzog as the temperature drops here and it threatens to snow I'm happy sitting in a bar - the warm, welcoming Fer du Cheval - with my maps and a cognac planning the coming day's walking. Or as much the night's walking. With darkness falling at five I've become a nocturnal rambler - my best walking time, trotting down the tunnel of light from my head torch, or as often without torch on using night vision down tracks and through woods. Fox eyes, boar smell, muntjac barking, rustles and scamperings.
Herzog took a detour to Greux to see the birth place of Joan d' Arc. Not my thing. But I'm dog-legging through the lakes and woods of the Foret d'Orient - a wildlife paradise - tonight en route to Troyes.
As I left the hotel bar last night, after yesterday's post I caught the headlines in the local paper; wolves confirmed in the Haute Marne. Indeed, one shot so very confirmed. I thrilled to the idea of wolves - big wildlife to go with the big wilderness of forest and mountains I've often been in since leaving Munich three weeks ago - out there with the boar and deer as I set off to walk through the dark and later find some woodland to sleep in.
Well, can't sit here forever moving my glass of cognac along potential routes for the coming days.
Or perhaps I can. After all I'm not Herzog with a pilgrim's need to get to Paris. Or, indeed, to get anywhere.