THE FULL HERZOG, WITH A SIDE-ORDER OF BIVVY 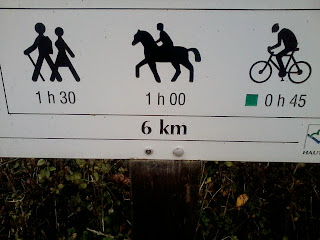 As the picture suggests I would be making better time on a bike or a horse. But I'm off cyclists - especially the leisure variety who take their cycles somewhere by car and pull on those daft leotards (giving the average middle-aged man the silhouette of a skinned frog with sinewy legs, pot-belly and goggle-eyed head and the inane Galvic action of the same frog hooked up to a battery; I'm against cyclists in their silly pretend-pelatons because in 400 miles of walking not one has responded to my cheery, one road user to another greeting. And I've been whirled past by tens of the beggars. Few going any faster than I go on my twenty year old ATB, fully laden with a weeks supplies and whilst singing happily.
Travelling with horses is wonderful and what I've done most of. But in exchange for the five or six hours of being carried along one spends the next eighteen hours looking after the nag's board, lodging, health, feet, tack, happiness and much more.
When I left Bar-sur-Aube in the early afternoon yesterday it wasn't quite cold enough for the forecast snow, so I walked 18 miles of forest and then exposed hill tops and into the evening beside a busy road in freezing drizzle and then rain. On top of one hill with a fringe of forest below on all sides like a monk's tonsure I lifted my head and howled wolf like for ten minutes and then despite my pack ran out of sheer joy along the road for a while.
The joy was tested somewhat by the continuing rain. I found scant shelter in a wood of bare branches and put up my tarp and the hammock under it, so was at least dry-ish for night. It was worth paying double for the classy packet soup - lumps of lard in amongst the vegetables. It rained all night and into the morning. I sat in my hammock till nine and then in a dryish spell packed and got on the road. It started raining again. Cars sped by even though I'm in the national park forest. I sang loudly in defiance. But it was suddenly much closer to Herzog's experience than my walk has been so far. And even more so now I've learnt that there isn't a café, boulangerie, shop or any succour between here and Troyes, some fifteen miles away.
On the bright side I have learnt how to pronounce Troyes. 'Tr-wa'. Who'd have thought....